Last week I made a brief trip over to England to see the Youth Music Theatre production of David Almond’s The Savage, in which Rory, our middle son, was taking part, and to travel back home with him.  There wasn’t any terrific hurry, so I decided to take the overnight Belfast-Birkenhead ferry and have a mooch around Liverpool on the way.

The journey started in the familiar low-key manner, with a walk to Enniskillen bus station.  I’d left it a bit late as usual, having turned back from the front door once to water the tomato plants (v. leafy and fragrant albeit no actually signs of incipient tomatoes) and once to attempt, unsuccessfully, to update my Amazon orders.  I had the dual excitement,  therefore, of wondering whether I was going to get to the bus station on time, and, having done so, of wondering whether the bus upon which I’d rushed so impulsively was really going anywhere near Belfast.  Clutching at straws, really: it’s not exactly Victoria coach station; unlikely that I would find myself accidently en route to Minsk or Barcelona.   My usual setting-out-on-a-journey unease wasn’t going to be as easily mollified as that.

Even my foreboding murmurings, however, had to admit that things were going pretty smoothly.  Neither Dungannon nor Ballgawley, not to mention Clogher, Augher, and all the other stopping points that don’t so much have names as alternative ways to clear one’s throat, offered anything in the way of rush hours, slow-moving tractors or even bomb alerts, so we actually arrived in Belfast a few minutes early.  Then the taxi driver took me to the right terminal without either digressing from the optimal route, overcharging, or giving me the benefit of his views upon the ethnic mix of contemporary Manchester.   I was so stunned by this sudden whim of the universe to cosset me that, checking in for the ferry, I unthinkingly told the truth in answer to the security lady’s question as to whether I had any alcohol in my suitcase.

She surveyed me for a moment with solicitious shock; this had obviously never happened before in all her years (she was a mature woman) of ship securing.

‘Just a miniature bottle of wine.’ I back-pedalled rapidly.

She considered.  Did her duties require her to fling my infintessimal few fluid ounces of Lidl Merlot into the Belfast Lough?  But she hadn’t really the heart of a jobsworth.

‘You mustn’t drink it on board.’ she warned, waving me through.  I had no intention of doing so; one of the advantages of the Norfolk Line being their stunning cheap booze. This small piece of contraband was merely intended to act as a pleasant aperitif while whiling away the hours in the departure lounge  before the ten o’clock sailing.

But Fate was to give yet another lurch in my direction; and I didn’t even pause in the departure lounge.  Despite it being barely eight o’clock, the minibus was already quietly shuddering in the car park ready to take the foot passengers onto the ship.  We few, we happy few (I think there were six of us altogether) were accordingly

(continued, January 2011, having broken off mid-sentence for some reason now unfathomable but probably involving toast or Only Connect …)

escorted into the bus.  It would be wrong of me to suggest that this was in any way a sybaritic mode of transport, groaning with the weight of sumptuous down-filled cushions, redolent of Spanish leather and gleaming with freshly-polished brass fittings.  No,  this was a former NYCC school bus, and as anyone who has brought up children in rural North Yorkshire will attest, both comfort and warmth are considered as dangerously effete southern concepts to which it would be most unwise to expose our impressionable young.  It’s hard to tell what level of delapidation would make a bus unfit to carry li’l tykes to school, but presumably decades of wheezing up Sutton Bank had left it no longer able to cope with gradients steeper than the ramp onto the ferry.  Which it did, just about,  giving us plebian pedestrians the opportunity to ensconce ourselves comfortably in the bar and take advantage of the generous wine carafe offers before the alpha motorists arrived.  Viz attractively alcohol-tinged view of sunset over Belfast Docks. 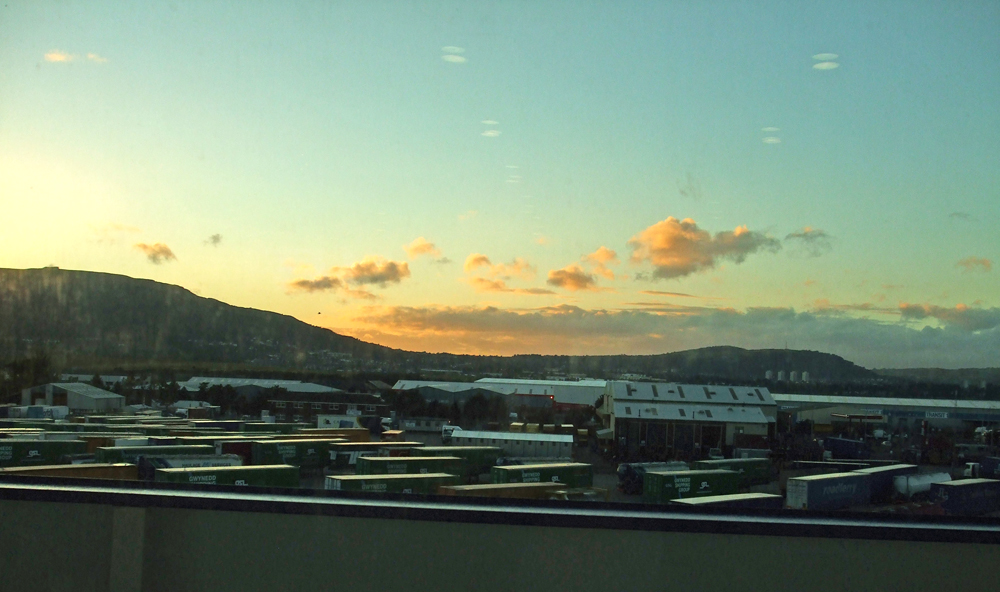 If I’d finished writing this blog when I should have done, I could have told you all about the book that I read over dinner (special vegetarian order sweet & sour vegetable noodles – more than satisfactory) and in my padded banquette nest (family finances not running to the extravagence of a cabin) but I didn’t, so I can’t.  I know that it was something satisfyingly light without any unpleasant junk-reading aftertaste, so probably a classic detective story, but really can’t remember any more. I know that John Dickson Carr hit the spot admirably on a previous over the Irish Sea adventure, if that’s any help.

I woke up (yes, all this and sleep too) at some ridiculous pre-six o’clock time to Tannoy announcements about breakfast and a view of Liverpool.  As both were included in the ticket price (not sure that they are now – meals, that is, short of issuing compulsory blindfolds, don’t know how they’d preclude the latter) I took advantage, rediscovering, after around thirty years, the soggy delights of tinned tomatoes on toast with really serious quantities of pepper.

Upon disembarkation (satisfyingly precise term for getting off a boat) I scorned the waiting taxis and took my suitcase for a walk into Birkenhead.  Hamilton Square, to be exact, a handsome set of Georgian terraces which apparently has more Grade 1 listed buildings than any other square in Britain but Trafalgar.  I’d been to the station on previous trips but this time explored a little further, with the same kind of mild astonishment with which I’ve encountered similar architecture on ambles around the city of Limerick.  (waiting for Yuh-Gi-Oh! games to finish, if you really need to know) . 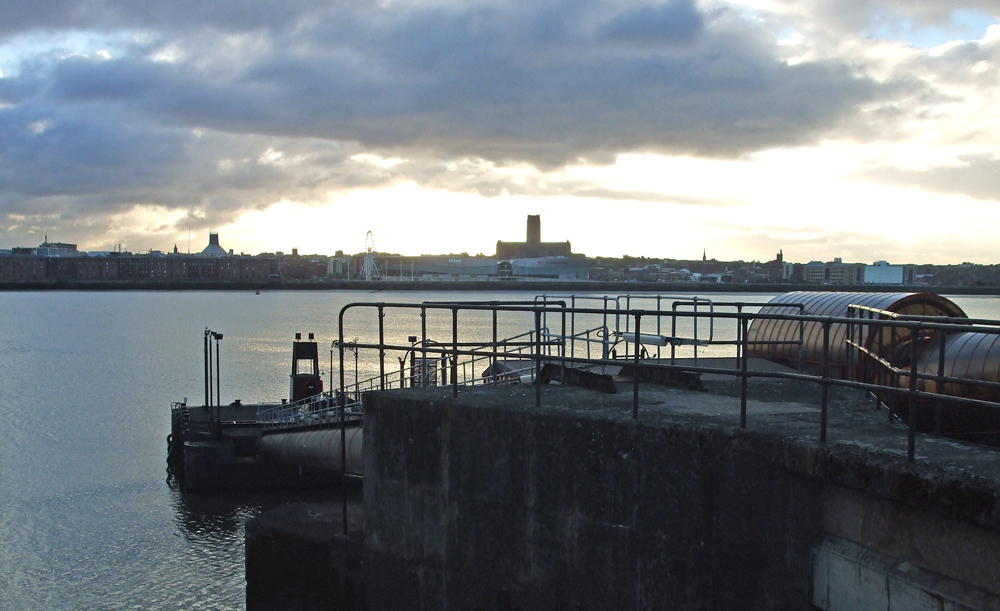 At this point,  over-excited by early morning sightseeing, I conceived the notion of, rather than travelling into Liverpool through the bowels of the underground system, taking what was so imaginatively described by Gerry & the Pacemakers as a FCTM.  (Here your mental soundtrack, to echo mine, should reluctantly switch from the brilliant Thea Gilmore song which gives this post its title, and instead constantly replay the couple of lines which are all I know of the Pacemaker’s hit. Got it? Sorry about that.)  So the suitcase and I wandered down to the Woodside ferry terminal to discover more about the epic voyage.

Unfortunately, it still being barely seven o’clock, the terminal was deserted, with no indication of when the first ferry might arrive.  After a few chilly minutes communing with the souls of the Benedictine monks who  founded the ferry in the twelfth century (here is your opportunity to eject Gerry from your mental jukebox and replace him with a nice bit of plainsong) and with that of David Lawley who is movingly commemorated on a bench looking out across the river, I reluctantly left the surface world for the Mines of Merseyrail. 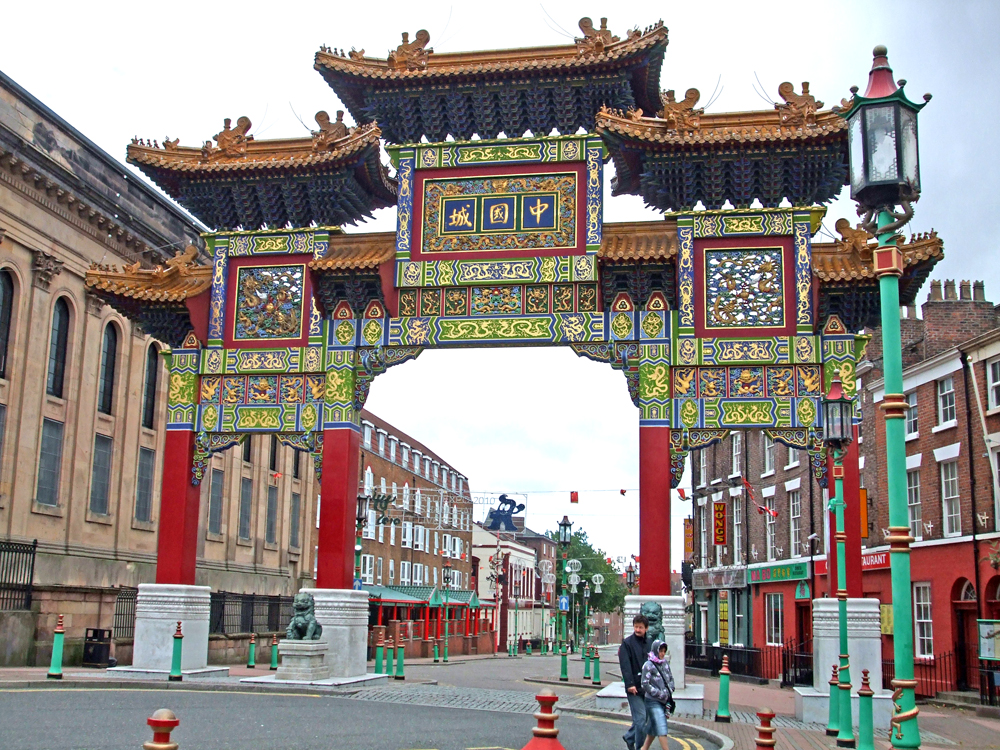 There’s not a great deal to say after this, really.  Liverpool proved to be moderately moochable, the highlights being Chinatown where I stocked up on plastic chopsticks (our previous wooden ones having proved irresistable to small boys seeking arrows) and the second-hand bookshop with a nice stock of Italian textbooks. 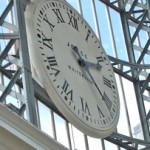 But by the afternoon (after a pleasant pizza at an authetically Italian restaurant) I was weary and ready to spend the last hour under the Lime Street station clock waiting for the train up to the Lake District.   The plan was to meet up with various other family members en route and arrive together. The train was extraordinarily crowded, having apparently replaced two which had been cancelled and lost a carriage in the process, and though I managed to wedge myself in with my son and his fianceé, we never found out, until we reached Oxenholme, what had become of Grandma.  (We need not have feared; she had charmed the ticket collector into upgrading her to first class and was relaxing in comfort while we enjoyed having delicate parts of our anatomies deformed by giant rucksacks.) 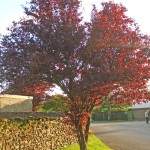 From Oxenholme we took a taxi to the delightful Pheasant Inn in Casterton and, after a quick slurp of the Lidl Merlot (see above, Belfast)  walked up to Casterton School where we revelled in veggie burgers and the YMT’s spirited production.

Our journey home, completing the circle, was by the surprisingly straightforward and economical Rail & Sail (let’s see how long that lasts); a gentle train ride, reminiscent of childhood holidays, along the coast of North Wales to Holyhead, followed by the ferry across to Dublin.

No doubt there was much more I was intending to say back in August when I began this post,  analyses to be meticulously constructed, metaphors to be finely balanced and timely conclusions to be reached, but many brain cells have perished in the months since then and I’m lucky even to have remembered my password.  Let this be a warning to you all of the perils of procrastination.  Happy New Year.