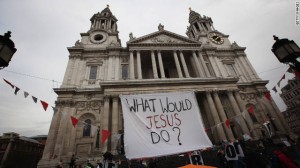 Last night I was reading Kester Brewin’s book Other: Loving Self, God and Neighbour in a World of Fractures, when I came across this passage:

“The temporal nature of these moments runs against the culture of permanence that runs right through the Church. We speak of eternity, of an undying body of Christ, of the constancy of our witness in stone cathedrals that appear to have been there since the dawn of time. Our unending prayers end with ‘forever and ever, Amen’; our song and liturgy hang heavy, invested with hundreds of years of history. Tradition is good. It can be a healthy momentum that carries us straight when the winds of change blow hard. But central to our tradition is the story of a man whose ministry lasted but three years. He had the choice – he could have sustained a far longer time with his followers, could have delayed his necessary death for many years. Instead, he allowed himself to be cut off. What is it then about the temporary that is to be celebrated?” (p. 143)

The moments he is speaking of are cessations in violence, are feasts, festivals, miracles and what Hakim Bey called ‘Temporary Autonomous Zones’ such as the eighteenth century pirate utopias which flourished in the gaps between the maps and the earthly reality. To these, I think, could be added the temporary communities of radical politics, from the women’s peace camps of the 1980s through climate camps to this year’s Occupy movement. But it is only now, in front of St Paul’s Cathedral, that the two impulses of Christianity, the temporary and the permanent, have been brought into such fierce relief.

St Paul’s Cathedral, perhaps, contains some of what is best about permanence: architectural splendour, music, liturgy and art, but also what is worst. When people stopped being primarily hunter-gatherers and became farmers, a new imperative arose: to enclose, control, build and preserve. As the Church became established, in both its lower and upper-case meanings, the same kind of change took place. Buildings and structures, constructed to celebrate and facilitate the work of the Gospels, began to obstruct that very work, their own requirements for maintenance overshadowing the tasks which they were meant to serve. And so we reach the state of St Paul’s today, with a board of trustees embedded at the heart of the financial industry, and an admission charge of nearly £35 for a family of four. You can imagine how it happens: each step leading logically from the one before, all for sound reasons, until we find ourselves in a barricaded glittering temple with the Gospel going on outside.

It was brave and honest for members of the clergy at St Paul’s to resign rather than allow themselves to be complicit in the state violence that will, it seems inevitably, be used by the Etonian chaps against the occupiers. But how much more would it have said if, rather than working out their notice within the cathedral, they had furnished themselves with a cheap tent and sleeping bag and joined those in the square.

I’m not Anglican-bashing: as a Catholic convert I have chosen to belong to a church with far more cathedrals, bigger bank accounts, a more rigid structure and a far more shameful history of complicity with money and power. One of the very facets of Catholicism that drew me towards it, twenty-six years ago, was its tradition. And yet within that tradition, the two thousand year-long, ragged gaudy procession of believers, those whose light shines the fiercest are those; St Francis of Assisi, Dorothy Day, Thomas Merton, who are most truly pilgrims and strangers, hunter-gatherers of the faith, with no place to call their own.

It’s a difficult tension to hold, and so not surprising that Rowan Williams, with his finely-tuned sense of nuance and ambiguity, has so far remained mainly silent. Not surprising, but a little disappointing. For this is an opportunity for the Church to recalibrate itself, to reset the compass of its heart. As Kester Brewin concludes his chapter:

“The beauty of TAZ is that it injects hope into these overpowering situations. The forces at work against us are huge. The powerful own the maps and have legislated for every last inch. But in the interstitial spaces, under the radar of those who would want to configure the world for their own benefit, brief festivals of hope are taking place. They are temporary flashes of light in dark places, but long after they have gone the air hangs heavy with a generous odour, and those who thought they saw something different are, in miniscule ways, penetrated by the marvellous for a second and can never quite get rid of that feeling. ‘Hush’ says the Church, leaving its petrified walls and tiptoeing mischievously toward the public square, ‘I am doing a new thing. Do you not perceive it?’ (p.150)