I’d prepared something to say at Saturday’s Green Party NI AGM (see Slugger O’Toole for a full account) in support of the motion,

“The Green Party in Northern Ireland is opposed to all oil drilling in Northern Ireland particularly in areas of special scientific interest and opposes the licensing of exploratory or exploitation activities that atttempt to harness shale gas reservoirs using the process of hydraulic fracturing or fracking.”

As it turned out, however, we were by this time running so late that we risked missing our parsnip soup, and since no one appeared to oppose the motion, it was passed without the need for my thoughts.  So, for what they’re worth…

Six months ago, like most people,  I knew nothing about fracking.  Now I feel a bit like Homer Simpson – I don’t know how much old stuff has been pushed out of my brain ….  Because it’s a complicated issue.  Not because it’s technically complex – the process itself is frighteningly crude: they drill down a mile or so, across another mile or so, send down explosives and follow them with huge quantities of water, sand and those chemicals which may or may not be added (and in practice always are) at enormous pressures, to shatter the rock in all directions.  It’s about as subtle as a toddler having a tantrum.

So, since you don’t want to hear me talk about just about everything, I’ll stick to just one point.  The pro-fracking people say this is an economic issue.  And they’re right, it is.  Not in terms of jobs that the industry will bring  – the headline figures of 7 or 800 are a maximum, over several counties, north and south, and over half a century.  What that boils down to is probably a very few, temporary, low-skilled and low-paid construction jobs, a tiny fraction of the real careers that the renewable sector could bring.  No, the important thing about fracking is the jobs and the livelihoods that it will almost certainly take away.

For years Fermanagh has been building up its reputation and success as a tourist destination.  But not just any tourist destination – we don’t have an Irvinestown Disneyworld or a Lisnaskea branch of Centre Parks.  We don’t even have an Enniskillen Eye.  All we’ve got are loughs and forests and moutains.  And that’s what people come for – to walk and climb and fish and cycle and sail and paint.  They come because it’s quiet and peaceful and clean and beautiful.  And that’s what it won’t be if and when shale gas extraction goes ahead. 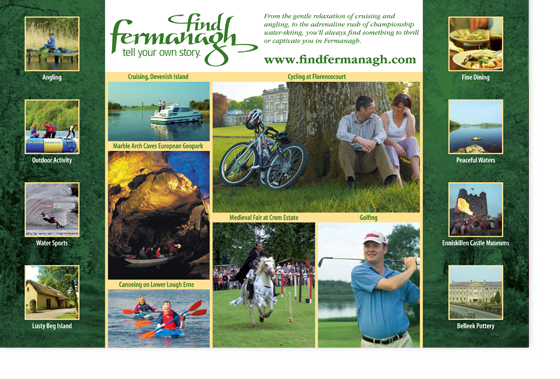 The industry calls their sites “wellpads” which sounds quite cosy, the sort of thing that Jeremy Fisher would perch on with his fishing rod.  But what they really mean are huge concreted industrial facilities.  They’re full of heavy machinery, pumps, processors, generators and so on,.  In America these usually operate 24hours a day, they create incredible noise and light pollution, serious air contamination, great clouds of smog and the foulest of smells. Just what you want for your next eco-holiday.  Then there are giant pits to collect rainwater, which of course belongs in the local water table, and more pits for the wastewater flowback which is by now strongly saline and contaminated with heavy metals and often radioactive materials.  And there are wells themselves, of course.  Initially there’ll be eight on each ‘pad’ rising to sixteen or more as time goes on.  And we’re not talking about just one or two sites – they’re planning on around a hundred in the Lough Allen basin alone.

These sites will of course be connected by new access roads and along these and our small country lanes will come the HGVs  bringing and taking away water and materials.  It’s been calculated that each wellpad (and remember, we may be talking about a hundred or more) will need over five thousand one-way, so ten thousand return trips by twenty-ton trucks and tankers.  Would you go on a cycling holiday in the middle of that?

And so where will these pads be built?  Some may be on farmland, which will then remain contaminated and unusable for decades or more.  But it seems likely that many of them will be built right in the forests, or what used to be forests.  A lot of people think that couldn’t happen, that the reason we have publicly-owned woodland is to keep it safe from this kind of exploitation.  That’s what I thought, so I emailed the Forest Service just to check with them. This is the entirety of their reply.

Hi Tanya,
Thank you for your email. The Department of Enterprise, Trade and Investment (DETI) is the Government department charged with the statutory responsibility and power to prospect or grant prospecting licences in relation to mineral and petroleum exploration.
Any licence issued by DETI entitles the licensee to carry out exploration on any land stipulated on the licence, including land managed by Forest Service, DARD.
Licensing this activity is a matter for Minerals and Petroleum Branch, Department of Enterprise, Trade and Investment, Colby House, Stranmillis Court, Belfast BT9 5BF.
Regards, Alex Brown (Forest Service) 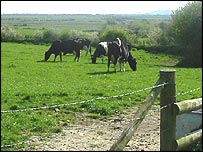 I haven’t talked about Fermanagh’s other main industry, agriculture and the production of food for the rest of the country.  I haven’t talked about what happens if the smallest amount of benzene, say, gets into any dairy farmer’s milk, and the effect of that on the whole sector.  I haven’t talked about the myths that shale gas could somehow lower our carbon emissions  (it’s likely that its net emissions are actually higher than coal) or that it can act as a ‘transition fuel’ – transition to what? – we already have the technology, the skills and the resources to produce abundant renewable energy.

I haven’t talked about what happens at the end of a well’s active life when it’s capped off and abandoned, with its protective casing designed to last for a hundred years and nearby acquifers which are needed for thousands.  I haven’t talked about the effects on human and animal health, on drinking water and fish stocks.  I  haven’t talked about the likelihood of earthquakes and the effect of those on the Marble Arch Caves or of  the risks of explosion and fire and what that would do to the forests.  But I won’t.  I won’t talk about anything else.  I’ll just urge you to support this motion and to get involved in the worldwide campaign.  This isn’t a Nimby matter.  We’re not saying, like people do about wind farms,  yes this a good idea but it’s not appropriate here.  Fracking isn’t appropriate anywhere.  In America, where they’ve lived with the consequences, they’re coming to realise that.  The president of the Colorado Oil and Gas Association said last month, talking about opponents of fracking:

“These nuts make up about 90% of our population, so we can’t really call them nuts any more.  They’re the mainstream.”

We in Northern Ireland need to learn from the experience of that mainstream. We need time, we need research and we need a proper framework that will protect our people, our landscape and our resources.  We need this resolution.