Last week I had the honour of a guest post on Gladys Ganiel’s faith and politics blog.  My short piece, a response to her post about the Twelfth of July parades,  tried to look at the subject from a rural perspective and specifically mentioned the desire among musicians, and brass band players in particular, to forge cross-community links and take part in more joint and integrated events. 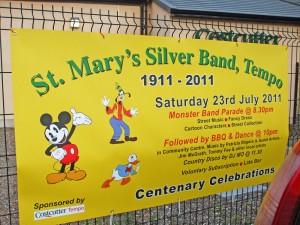 Within a few days I had the chance to see in practice what I had so blithely been talking about.  As anyone who rashly flings their opinions online will know, circumstances are rarely so helpful, and so I didn’t want to miss the opportunity.   The little town of Tempo, some ten miles from Enniskillen, has two silver bands, the mainly Protestant Tempo Silver Band and the mainly Catholic St. Mary’s Silver Band.  St. Mary’s celebrates its centenary this year and marked it with a ‘Monster Band Parade’ last night in which Tempo Silver and other local bands were invited to participate. 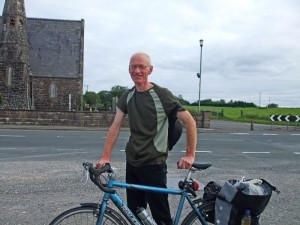 The only potential drawback, from my point of view, was that I had to cycle there and back.  Twenty-odd miles is a lot more than I usually manage in my potterings around town, but my husband, who does the trip at least once a week, assured me that I could manage.  To sweeten the pill he promised a Guinness and a Chinese takeaway from any establishments of my choice within the metropolis of Tempo (pop. 533).  As usual, gluttony took a slight lead over sloth and I agreed to give it a try.  The main road from Enniskillen to Tempo is a long, long upward slope past a straggle of small industrial units so we took the gentler back roads for the first few miles, giving way to passing cows, before joining the main road here, at Garvary church. 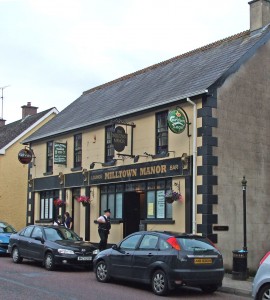 After that it was even easier,  without even bovine congestion, and as we coasted into Tempo I scarcely felt that I’d earned the promised black stuff.  I wasn’t going to admit it though, and made straight for the Milltown Manor before the rush.

They don’t serve food in the evenings,  and so we repaired to the Yummy Inn (no doubt a traditional Chinese name) across the road for something hotter and more conventionally nutritious.

A side road led to a pleasant little park with a picnic bench and here we whiled away the final minutes before the commencement of the Monster (shades of Daniel O’Connell?) Parade. 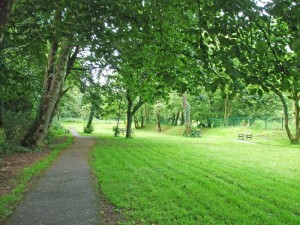 The parade was a great success, starting not too very long after its advertised commencement (we are, after five years, well accustomed to the concept of Fermanagh Time), and including: 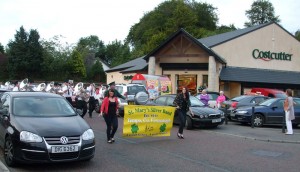 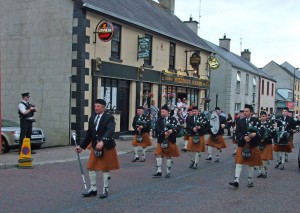 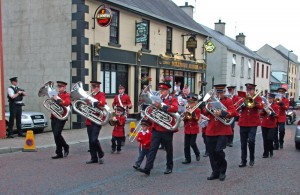 Tempo Silver Band, with small bandsmen on cymbals and triangle: 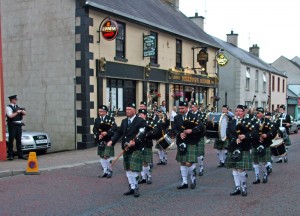 Coa Pipe Band (we’d passed the turning for Coa on our way, which indicates something of the richness of the musical tradition within a tiny area); 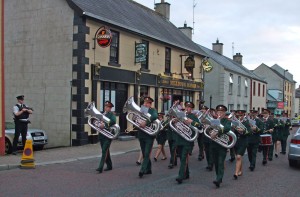 Ballyreagh Silver Band (we’d also cycled right past the hall where they practice);

St. Eugene’s Band from Omagh, whose website shows their own practical commitment to bridge-building:

“Our busiest time of year is at Christmas when we play carols at various locations culminating on Christmas morning when we play at Omagh Sacred Heart Church followed by attendance at one of the Omagh Presbyterian churches.” 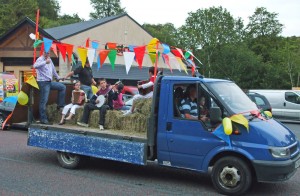 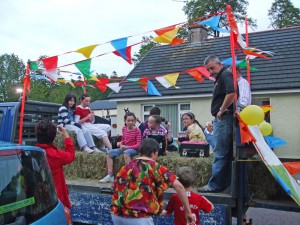 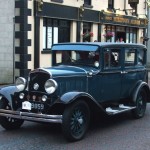 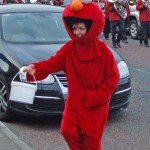 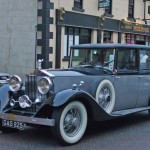 a couple of lovingly maintained vintage cars,  some motor and quad bikes and frolicking around them all, a troupe of muppets, superheroes, Elvis and giant animals collecting donations and handing out sweets (we met a very elderly lady on our way back joyfully sucking her lemon lollipop).

The parade ended at the parish centre with  generously heaving tables of food, overflowing teapots and a bar (which sadly we had to foresake in the interests of wobbling home safely).  Later there was to be more music and a barbecue.  The whole evening was hugely enjoyable and characterized by enormous goodwill on the part of both musicians and spectators, a tangible expression of what is shared by the people of Fermanagh, so much deeper and more important than what sometimes divides us.

It doesn’t negate the problems that Northern Ireland has experienced, and which continue to threaten us (the policeman at the edge of several of the photos above can be seen cradling his gun – not a feature of most English village pageants) but provides a genuine and practical example of cooperation and generosity.  Like the successful Shared Education project which has brought thousands of schoolchildren together across traditional divides, this kind of initiative shows that it is often the smallest and most rural communities which can lead the way into a better future.