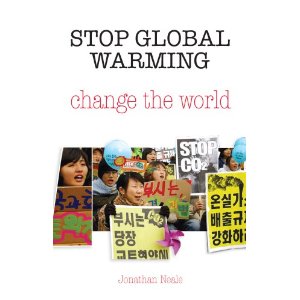 by Jonathan Neale and was surprised, impressed and heartened.

The rather naff title led me to expect the usual guff about appliances on standby, celebrity recipes and encouraging your neighbours (it’s always your neighbours, I notice) to use their cars less.  If I’d known anything about Jonathan Neale, I’d have realised that it would have none of this nonsense.

Actually, he could have got away with stretching his material into several books, and is to be commended for fitting it all into one.  The book is made up of five parts, most of which I’ve read twice already, so densely packed are they with good stuff.

Part One, The Scale of the Problem has three chapters: Abrupt Climate Change (a vital adjective), Poor People are not the Problem and Sacrifice is not the Answer.  From the titles alone, Neale’s argument, that social justice and climate change action are complementary and symbiotic, is evident, but the detail is well worth investigating.

In Part Three, Why the Rich and Powerful Won’t Act, Neale analyses neoliberalism, corporate power and the myth of unlimited growth.  Part Four, Climate Politics, gives a potted history of the climate change campaign and explains why personal and market solutions won’t bring about the changes that are necessary.

Finally, in Part Five, he analyses ‘Capitalist Disasters’, notably Darfur and New Orleans and ends with an inspiring chapter entitled ‘Another World is Possible’.  It is, and this book shows us how.