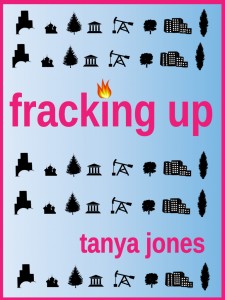 My new novel, Fracking Up, was published yesterday.  It’s the first entirely new book I’ve written (Summer 17 was rediscovered and revised) since Girotondo in 2006, so merits a small celebration.  I’d started a novel set in Northern Ireland in between the two, but my imagination wasn’t really caught, and so I don’t suppose it will get any further.

Like most of my books, the plot for Fracking Up came to me very quickly, on a walk through the woods into town, with only minor additions and developments popping up later.  It was obviously going to be a book ‘about fracking’ in the sense that fracking was its background and the engine of its plot development, but I  didn’t set out to write a treatise, and hope that’s not how it’s turned out.

Firstly and lastly, it’s a story, and it’s as a story that it will stand or fall.  The plot is less complex than some of my previous ones (I’ve just seen an American review of Girotondo that complains about it being ‘a bit convoluted’) but there are, as usual a lot of characters (the American reviewer doesn’t like that, either) and a lot of jokes.

One of the really important things to point out that it isn’t, is a roman à clef.  I don’t particularly enjoy reading novels that are depictions of reality  overlaid with a fictional gloss, and I certainly wouldn’t want to write one.  One of the greatest pleasures of writing, for me, is being able to use, and stretch, my imagination, to create a new world and populate it with the people who, I confess, live and move inside my head.  That, I suppose, is one reason why, with notable exceptions, most of my characters are generally sympathetic;  I don’t want to give brainspace to the others.

So when I write that the Island and its inhabitants are fictional, I mean just that.  There aren’t any disortions or upside-down viewpoints that will bring it into a focus as a real-life original.  Sometimes people have difficulty with that.  I remember that when I wrote the Ophelia books in the 1990s, I’d be constantly ambushed with questions about Rambleton, the town in which it was set.  ‘Is it Helmsley; is it Masham, is it Kirkbymoorside or Thirsk or Ripon?’  It had elements of them all; but it was indubitably Rambleton, and couldn’t be anywhere else.

In the case of Fracking Up, a fictionalised version of real life would be particularly uninviting to me as a writer, as sadly, it would be so dull.  As anyone who has been involved in a long-term campaign knows, most of the work that has to be done is a long, often repetitive slog.  A novel containing descriptions of proof-reading leaflets, agreeing minutes and operating overhead projectors would be unlikely to provide any serious competition to  Fifty Shades.  So anyone hoping to read the secrets of the Fermanagh Fracking Awareness Network in FOOI’s rash adventures and steamy encounters will be bitterly disappointed.

Similarly, though real life politics and corporate behaviour are often stranger than fiction, they’re also more complicated and rarely as funny.  The creation of the Island’s government, the town council, Anonymous and the Island Bank allowed me to introduce a sort of satiric fairy-tale element, a Magnus Millish irony, which I hope readers will enjoy as much as I did. Another advantage of an entirely imagined world is that it contains areas of complete mystery, to the writer as well as the reader.  I know no more than anyone else about what Jenny’s job really was or whether Hilly put gin in her tonic (or vice versa).  And as for the cat …

The elements of Fracking Up that are soundly based on reality are the effects of fracking, on the environment, health and the local economy.  All the descriptions of these are based on observed incidents and consequences in the real world, transferred from their North American context across the Atlantic.  So far we have not seen in practice what fracking will mean for rural communities in Europe, so much more densely populated and topographically complex than the plains of America, and one thing I wanted to do in the book was to explore what those effects might be.

There is, additionally, another plot element which was central to my thinking and writing in this book.  I don’t want to specify it here, as it would be a substantial spoiler, but it arose out of a news story a couple of years ago, which shocked me deeply and has haunted me ever since.  I hope that Fracking Up will be the sort of book that merits rereading; that people will race through it firstly to find out what happens next and read it more slowly again later, understanding its layers in the light of what is revealed at the end.  Once you’ve read it, you’ll know what I mean.

So, what am I hoping that Fracking Up will achieve?  As I said above; it’s a story, and, like any other storyteller, my first wish is that people will enjoy the tale, that the plot will fascinate them, the writing entertain and that the characters will populate their own imaginations as vividly as they have mine.  If, as a result of reading it, they start to ask questions about the hydraulic fracturing process, about the vaunted benefits of shale gas extraction and about the ways in which local communties are exploited along with their resources, then I will be doubly delighted, and will hold my head up high at our next FFAN committee meeting.  If only we had the Rat’s Finger to adjourn to …